Information about Forced Marriage for Girls

Child marriage leads to sexual abuse, far too early pregnancies and a life of misery

Why do we talk about child marriage?

Worldwide, 1 in 5 girls under the age of 18 is forced into marriage. Every year 12 million girls are exposed to the risk of child marriage. Early marriage is practised in many countries. The highest rates are in regions of sub-Saharan Africa and South Asia. In India, 15.5 million girls are affected, in Nigeria 3.5 million. Child marriage violates basic children's rights: Girls are cut off from education, exposed to sexual abuse, exploited and socially isolated. A life in poverty is usually the result. Because protecting girls from child marriage is important to us, we have been a partner of Girls not Brides, the global network to end child marriage, since 2016.

What does SAIDA do against child marriage?

In our project country Burkina Faso, according to UNICEF, 83,000 girls under the age of 15 and 418,000 girls under the age of 18 were married. Child marriage is prohibited by law. However, the law needs flanking measures to ensure that girls are no longer married under the age of majority. In our girls' protection program we implement girls' rights in concrete terms: We conclude agreements with the girls' parents. These agreements include that the girls in the family are not subjected to genital mutilation or early marriage. In addition, the parents undertake that the girls may finish school.

To the girl protection program

The forced marriage of girls to mostly older men usually means sexual abuse with its traumatising consequences and premature pregnancies. Especially in sub-Saharan Africa, for example, the risk of a 15-year-old girl dying before or shortly after delivery is 1 in 40. The mortality risk of children is also closely related to the mother's education.

Girls are usually not allowed to continue going to school after they are married. If girls leave school too early, they lack vital information for their region, for example on malaria, HIV/AIDS and contraception. Moreover, they have hardly any chance to escape dependence and poverty, as they lack the basis for vocational training.

Often the young girls have to live as second, third or fourth women, even though polygamy is officially forbidden. There is often a strict "pecking order" among the women, and the youngest woman owes absolute obedience not only to her husband, but also to the older wives. The girls are called upon to do all the heavy work and sometimes they do not even get enough food for themselves and their children.

But the legal age of marriage is often alarmingly low, not only in developing countries. Even among EU members (Hungary, Romania) and accession candidates (Serbia, Turkey), there are countries with a legal marriage age of 16 for girls, if the parents agree. In Lithuania, for example, girls can be married at the age of 15 if their parents give their consent. The portal Indy100.com has developed an interactive map showing the legal age of marriage for girls and boys worldwide (click on photo leads to the maps): 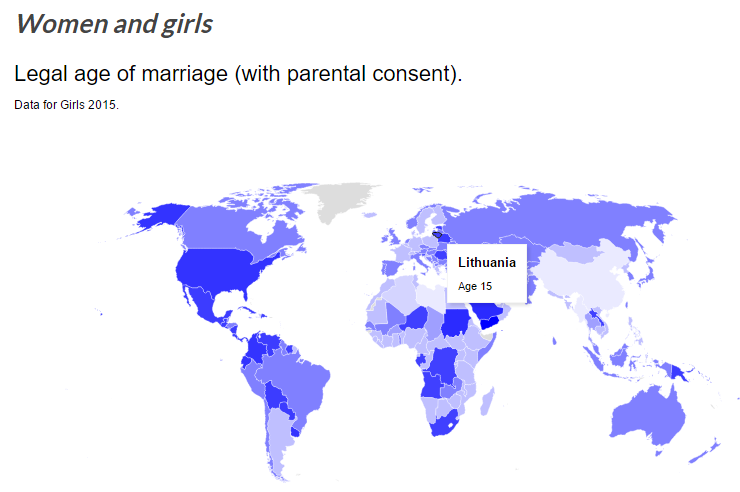 Our Fields of Work